I loved to play Clue when I was a kid. I loved the manila envelope, where the damning information was held. I loved the rope, the lead pipe. I loved the secret passages. There was always the problem that there were really no appealing female characters other than Miss Scarlet—the others were old and unattractive (though why did this matter to us? Already brainwashed, I suppose)—but the game itself was still, reliably, fun. But somehow it never occurred to me that there could be a book made out of it.

But there is. Or rather, there are. And the Elder somehow found out about them. And they are so amazingly silly. 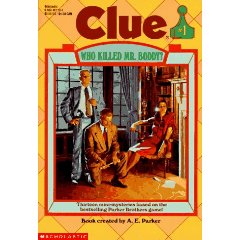 It's hard to convey the whole sense of them, except to say that most chapters seem to begin with "Aaarrrghhhh!" or "EEEEHOOOOOWOWWWWWWWW!" And then to go on from there. Colonel Mustard runs around challenging everybody to a duel, Professor Plum is unable to remember anything at all (because he's a professor, get it?), Miss Scarlet is still fabulous and sexy, and everything is utterly ridiculous. The Elder loves them. She finds them altogether hilarious. But they mystify me. It's as though someone went out and found an enterprising 4th grader and got them to write the books: "Just write something you yourself would like to read," they maybe said. I can't imagine how else they got written.
See, when I played Clue, lo these many years ago, I took all the macabre stuff completely seriously. I had no idea it was all tongue in cheek; I thought it was straight-up scary. I felt that I was participating in something a bit soigné, a bit sophisticated. It never occurred to me that it was all a bit of a joke. Do these books re-create a whole new ethos for Clue, or was it just true that in this (as in, regrettably, so many other areas) I was completely misreading everything? I wonder.

What they're reading
The Elder: Clue: Midnight Phone Calls
The Younger: Sibley Guide to Birds (look, those are all swans!)