I remember the moment when I learned to really read, when I actually
was aware of myself reading and understanding a book. I learned to read
a bit later than the average kid, as far as I remember, and it felt
fraught. It was at the Eastchester Public Library and I was with my mother, trying to show her that I couldn't read. The book? Red Tag Comes Back, which for the longest time I thought was called Red Tag the Salmon. 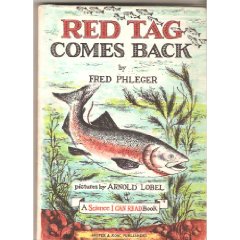 I
referred to it as my favorite book for a really long time, the whole
thing made me feel very grown up.
I've often thought of that book, especially once I had children of my
own, and they began their reading lives. And finally, it occurred to me
to look it up. The internet is such a strange thing, especially for
those of us for whom it is a learned, second language—my children think of
information as something easy o get, which is a whole different way of
looking for things. It was nice to see the book there again. Not that
it's ever something I am going to get for my children. I no longer
think of it as a favorite book, I guess. I think part of why I loved that book (aside from its being the book that took me over the bridge into the reading world) was that I found it by chance, looking
along the shelves. I hope the way the world works that we will all
still be able to find things unexpectedly—not because "If you're
interested in this, then you'll be interested in these titles…" but
because you would never have known that you would be interested in
this, and then all of  a sudden there you are.