So, when I first started this blog, lo these many
moons ago (about six weeks or something ridiculous), I posted about Babymouse and I gave it, I think, short
shrift. Diana had been against it when we first encountered it; her
friend loved it, but she got dead set against it, against the pink, the
hearts, the queen of the world idea. All of it. And I just didn't think
much about it; she wasn't a kid who needed any encouragement to read so
I figured if she didn't want to read it, what did I care? And, too,
there may have been a bit of "Well, my child doesn't fall for the books
that are pitched directly to her, she's a bit more creative… bla bla
bla." And I think, in going along this way, I may have dropped an
unkind word or two about Ms. Babymouse, thinking that it was some sort
of graphic novel/princess package for 7 year olds. Thinking that Babymouse, perhaps, was a bit big on herself, that she might be thinking about herself as Queen of the World.
Babymouse: please forgive me. I knew not what I did. 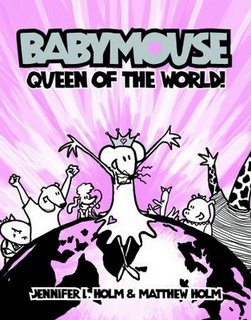 Chestnut
has discovered the small, zany mouse, and she has shared her with me, and together we have found great joy.
Reading has not developed easily and painlessly for Chestnut, and it's been very
frustrating for her, a great lover of stories and of being read to, to
not be able to read them herself. In her opinion, and from all she has observed, she
ought to have been able to read years ago. We've been as forceful as we
know how to be in asserting that reading is different for everyone, and
things happen at different rates, and it doesn't matter how fast you
get there, and so on and so on. Nonetheless: for her, frustrating.
But she has really begun to find her footing these past few months, and
right on cue, Babymouse has come galloping in to meet her there. The
first one deals unabashedly with the whole world of mean girl horror in the form
of Felicia Furrypaws (is it just me or does this book eerily echo
Maus?). Babymouse is charming and hapless and desperately longs to belong, to be friends with the popular girls, to have power. Let me just say that for your average 2nd or 3rd grade girl, it resonates. Babymouse's exact age and grade are left unspecified, but she's
studying fractions, has gone through grades 1, 2, and 3 with best
friend Wilson the Weasel, and the glamorous aura of an older mouse
hangs around her (slumber parties! horror movies!), making her all the
more enticing for any little people you might know. And the eventual
triumph of the good guys—what can I say? I've been won over. Babymouse: I was all wrong about you. Will you ever forgive me?

2 thoughts on “I Was Wrong, or Babymouse, part deux”