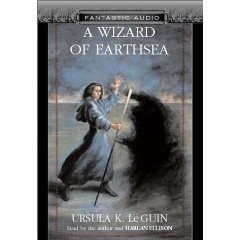 A couple of things happened:
1) Henry Louis Gates was arrested
2) A reader wrote in to me and asked if I could recommend a book for her friend’s daughter, a 13-year-old Harry Potter fan, who is black. She also liked the Earthsea cycle. She hoped I could come up with a fantasy book that had a black character.
3) Jezebel posted about a YA book, published by Bloomsbury, in which the main character was black but they wouldn’t let the image of the girl on the cover be black, because “black covers don’t sell.”

So here I am thinking, what’s a reader to do? I’ve been thinking about the book for the Potter fan, and the only thing that has so far come to mind has been Octavia Butler, whose books are not for children (though would a 13-y-o be into them for exactly that reason? Probably). I did ask Diana, and she was able to come up with 1) The Circle of Magic series by Tamora Pierce, which has one of the four main magical characters being black and 2) W.I.T.C.H. with a similar set up.
But the fact that I didn't know of any, and when we worked on it there were really only two series, is disturbing. For early readers, for picture books, publishing seems (from the outside, anyway) to have opened up: there are amazing and excellent books that include many colors of people. But as the children get older, the field seems to thin. And while many excellent books have a “black friend,” far fewer have a black hero/ine. And fewer even, of these, are magical fantasy books. Realistic fiction seems to have a better handle on it. But fantasy? I'm not seeing it. And the covers don't help. Diana pointed out that the Wizard of Earthsea books, excellent as they are, often have an image of Ged on the cover, and they always show him as a white person. Take a look at him there at the top. But the book says he was the color of dirt. White? I don't think so.
But this must be, at least in part, because I am not reading the right ones. Right?  Tell me, everyone: what should I tell this reader? What should I tell my kids? What can we do to force the world of publishing to open itself up to the world outside, and make both of them stronger, better, and more alive?

19 thoughts on “Black & White & Read All Over or, What’s the Deal With Racism in Fantasy Books?”