It was hot. I was cranky. We'd been in the library for over an hour. I wanted to leave. I wanted to go and do something else. I wanted, in a profound way at the moment, for things to be somehow other than they were.
I wandered to the upstairs section and browsed through the books for sale. And that's when I found it. 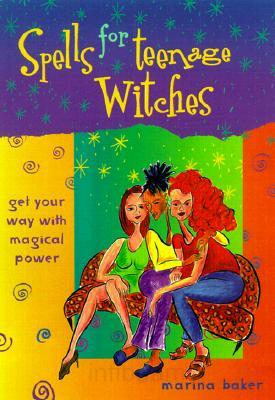 The cover was slightly different (I'm fairly certain that there wasn't anything about getting your way, as the subtitle here really doesn't sit well with me). I browsed through it. White magic—check. Learning about herbs and plants—check. Doing no harm to anyone ever—check. I knew it would have been a book I went absolutely crazy for when I was a kid. But was it too crazy? The deciding factor: it was 50 cents. I bought it.
Diana went for it as much as I could have hoped. She and a friend went foraging through the Botanic gardens looking for wands (oak and hazel are the most magically powerful, who knew?). There were spells considered, ones that help you keep your room neat and ones to improve your handwriting (what could be better?). It was a thrilling success.
And now, weeks later, when things get hard (as they inevitably do) I remind her of the spell book. And I think I'm reminding her of what she loves, of what she cares about, of the specter, or at least the possibility, of her own power. Because it seems to me that just the sense of it might be enough to shore a person up in this difficult world. But at the same time I'm saying, spoken or not, that the possibility of magic exists. Boy, do I hope that's the right thing to do.

4 thoughts on “Brilliant? Or Just Crazy?”