Note: this is not our bookshelf. 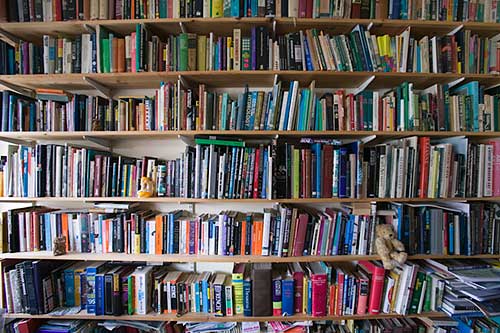 First, I feel compelled to note that I wrote this whole post already and then something bad happened on the computer and it vanished forever, so while you read you should be haunted by a better, more light-handed and impromptu post floating out there somewhere in cyberspace (cyberspace? is it even called that anymore?).
However.
We just returned from a big trip to faraway Sweden, which was wonderful and excellent in all sorts of ways, but which also brought all of us face to face with that thrilling and vertiginous fact of travel: difference. Different alphabet (did you know Å was its own real letter, and not just called "A with a little circle on top" but more something like "ouoo"?). Different electrical outlets. Different language. Different.
In many ways, this was wonderful. I forgot how much I love that feeling of realizing that the world is much bigger than I am usually conscious of. But I also forgot what a big deal it is for kids to have everything—things they didn't even know they were taking for granted—switched up on them.
So. Rereading.
I love to reread books, I read them over and over, some ones on particular. When I'm sad, Jane Austen is obscurely but absolutely comforting. Patrick O'Brian cures cynicism. When I have the flu, Air Force Wives can make me forget my troubles.
Diana, too, is a big rereader. So when she packed up her (22!) books for the trip, she took her old favorites. I think it was equal parts wanting to have "friends" along, and the sense that when we buy a new book it's impossible to hold  off and three hours later it's already read. But the thing is, even when you like rereading, for some people, having only 22 books with you—especially if you're already somewhat familiar with their contents—will start to make you crazy after, let's see, 8 days.
We went to Stockholm's truly lovely international library and there they were, whole new shelves of English language books!  And then: she moved through, turning down one book after another until she found—books she'd read before.
I was struck with equal parts profound frustration and sympathy: when you walk into a party, it's awfully comforting to see a familiar face. But good heavens, couldn't she just…well, I guess not.
When I am feeling more sympathetic I remember a conversation I had once with a woman who had never reread anything. Why would you, she asked, when you already know how it ends?
I had no answer for her then, but later it somehow became clear to me. It's like Paris; once you go, and see how wonderful it is, don't you keep wanting to go back?

11 thoughts on “On Rereading”