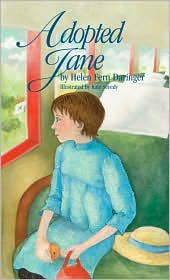 I've been reading (thanks to an extremely kind commenter, who finally gave me the name of it) Adopted Jane, a book that stuck with me from childhood, which I hadn't seen since…1975? What I remembered had the quality of a dream—a recipe for a one-egg cake, the warm sunny farm, the quiet coolness of the older lady's house—along with the barest outline of a plot: good kind orphan who is thought to be too old to adopt gets a chance to visit two families one special summer, then (spoiler alert!) they both end up wanting to adopt her because she is so good and nice, and she has to choose between them.

What has really struck me reading it is how very much I missed. All the—I want to say subtext, but it's actually more like the actual text, just talking about things I didn't quite understand. The book was so much about things I somehow failed to grasp: class differences, money, power. And I wonder, now, how that makes a difference in a kid's reading it. So often Diana will read something that seems a little adult for her, and I'll console myself by saying, "Oh, it'll just go over her head." But it's something else entirely to see how profoundly that actually happens, and to wonder, What does it mean to read a book and somehow not see what's there?

I remember learning that the Narnia books  were Christian allegories, and feeling somewhat betrayed. They had just seemed magical and true to me when I read them, and to find out that there had been something else going on had the feeling of all of a sudden noticing that the grownups are talking about you and hoped you wouldn't catch on. But I don't know anyone who, when they read them, understood them as allegory. They were only loved, not understood.

But does, somehow, somewhere, the information sink in anyway? Was part of the reason I responded so strongly to Adopted Jane because it had this extra layer of meaning I could sense even if I couldn't understand it? Or is it just pearls before swine? (Or some other less insulting metaphor, which surely one of you can think of.)

4 thoughts on “If Subtext Falls in the Forest With No One to Understand It, Does It Make a Difference?”