A stepmom writes in concerned about her stepson, who just doesn't want to read. That's all, he just doesn't. Especially fiction. Everyone tries to get him to read, and he's not into it. He likes comic books though, including Donald Duck, Bone, etc. He also loves movies, of all kinds. He tried Harry Potter and it left him cold (though he did like the films). The last book he remembers enjoying in school was—a biography of Henry Ford.
Wow.
He said he might be interested in reading about World War II, but most of his family members seem to want him to read fiction.
What do we have for the guy?

Well, I must say, that as someone who is ridiculously biased in favor of fiction, and who knows how unpleasant it is to be asked to read something you don't want to read, I say, let this person follow his heart. If he doesn't want to read fiction, then by all means, don't make him. That doesn't mean he shouldn't read, though. If he was good with a biography of Henry Ford, by God, he's got the will and the imagination to be thrilled and amazed and transported by reading all sorts of things, I would think. The thing that gives me pause in coming up with a recommendation is his age; 13. That's a big kid, but not yet a grownup.
I thought of a lot of things: of Asterisk and Obelisk, of Tintin, of Bone. Maybe Maus,by Art Spiegelman, a brilliant graphic novel that's certainly about World War II. Maybe Persepolis, another amazing graphic novel, this one about the Iranian revolution as seen through the eyes of a teenage girl. And heaven knows that there's nothing wrong with watching the movie version of a story first, and getting to the book from there.

I thought, too, of my own favorite biography from when I was a kid: The Story of George Washington Carver (I thought it was the world's coolest thing that he made his own microscope). But the truth is, these were all thoughts, when my real answer is from a blind gut feeling (one which apparently has no respect for age-appropriate reading levels): 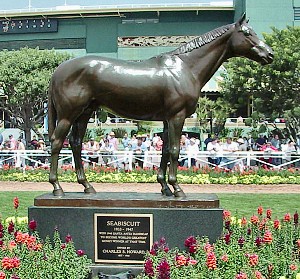 That's right, Seabiscuit.
Here's the crazy thing: I haven't read this book. And I know it's not specifically a book for kids. But it just seems so right, somehow. What can I say, it just leapt to my mind as though it was meant to be there.
But really, probably the reason I don't have enough to recommend is my fully-acknowledged weakness in the nonfiction arena. So everyone: what can we give this guy to read?

21 thoughts on “We Recommend, How About Some Great Nonfiction?”