I
got a publicity email asking if I want to review Winter's Tail. And since I can't resist a good Shakespearean pun,
and it was 11 at night, I said, "Sure!"
I got an email back thanking me in advance for reviewing it.
"Oops," I returned. "I can't promise to review it, I can only promise to read it and consider reviewing it."
"Fair enough," (or something like that) the next email said. And there's a giveaway. The book was on its way.
It got to my mail box this past Tuesday, where I picked it up on my way
to a middle school fair, which is a herd-like
gathering of nervous parents, middle school principals, lots of
tri-folded promotional leaflets, and sweet 7th graders who shove the leaflets parents' hands while everyone circulates sweatily in a
stifling gym and worries about the future. I jostled around with
Winter's Tail weighing down my bag, then dragged it along with me on my
ride home (I ran into a neighbor there), then wedged it in my armpit just a few doors down from my house. Almost home—and then I ran into another neighbor who told me something that changed the way I viewed everything: earlier that day, at our school, at pickup time, a
little boy in pre K had run into the street and been hit by a car. He was going
to live, but it looked like he had lost his foot.
Something like this, of course, erases everything else, because keeping
one's children safe is the most important thing in the world. Nothing
else matters when put next to it.
Later that night, I read the book. 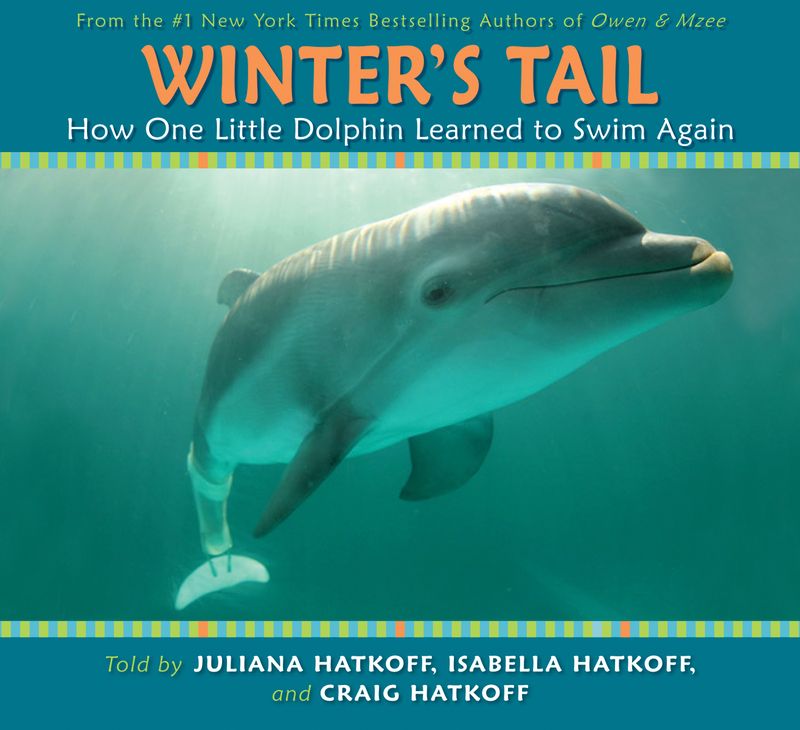 Winter's
Tail is not a well-written book. Its tone never wavers from cheerfully
earnest. The sentences can be
strangely convoluted. There are A LOT of words, so it's a bit much for
a new reader; it's more for a teacher to read to a class.

But.
The
story it tells is deeply moving. A baby dolphin (cue the cries of
"Cute!" from far too many little girls) gets caught in a net and is
rescued, but loses her tail. She can't swim well and stay healthy
without it, so scientists and doctors work together to create a
prosthetic tail. The innovations made while creating the tail have now
helped many others with prostheses, including Iraq war veterans. And
Winter herself now serves as a powerful example to children, especially
those who need technology to function. Her very existence, and her
struggle, serves as consolation and inspiration, I think, to them.
While I am leery of "issue" books, there are far too few books
that acknowledge the many among us who face these sorts of struggles,
whether with health or other issues. This book may not be told or presented exactly how I would
wish, but I am deeply grateful for its existence.

I found out later that the little boy at our school is recovering, and
that it seems that he will keep his foot, for which we are all profoundly grateful, though many other struggles
present themselves. Here's hoping that this post finds you all well and healthy and as whole as you can be.

Now for the giveaway (could there be a more crass transition?). The
publisher wants to give one of this blog's readers a "Winter pack,"
which consists of the book, a keychain, a stuffed animal, and a Winter
DS game. So if you are interested, or want to give this to someone who
is, how about you give us a recommendation of a book that offers consolation. The winner will be selected
randomly (numbers out of a hat is what we're thinking over here…) Oh, and there's also an essay contest on the scholastic website, if you're so inspired.

15 thoughts on “The Possibility of Consolation”