I had one of those moments where I was lying on the floor of my room and reached out my hand touched—this: 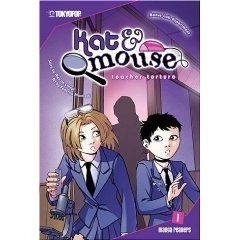 So
what could I do, given that I was lying on the floor and getting up and
finding a grown-up book seemed all but impossible? Well I could read it
of course. And so I did.
It's the story of a girl whose dad gets a new job in New England, so
the family moves there to the "fancy" school, where there are mean
kids! Mean popular girls! They don't even care about science! They're
the children of senators and have names like "Chloe," and they're mean!
Really mean!
I don't know. I was really rooting for this book through the first half
(the whole thing, being a graphic novel, takes about 15 to 20 minutes
to read). I mean, who isn't against a mean girl? But there's something
uncomfortable to me in how readily we resort to the mean girl
trope: she is blonde, pretty, rich, mean. She is against the nice
girls. She has the best-looking guy, but she doesn't like him for
himself, and he, somehow, always seems to be deluded by her. He's never
seen as the real problem, more like a doofus who got taken in by the
mean girl's meanness, but who, given half a chance, would really go for
the nice girl.
The nice girl, however, in this case anyway, is not someone I feel all that much connection
to. She's just as pretty, just as far away from a person I could be or
know as the mean girl is.

And
all this mean girl things smacks of weird hidden misogyny to me anyway.
It's not that I don't buy the existence of mean girls. Believe me, I
know from mean girls. It's just that, I don't know: she has a
pretty name, she is pretty, she says nasty things to the nice girls,
and she ends up losing the guy. We're supposed to feel like we hate her because she's being mean, and we would like her if only she were nice, but that doesn't seem entirely accurate somehow. Instead, it's as if in constructing this whole image we're just increasing the girl-on-girl emotional violence, instead of addressing the real enemy (which is—what? I don't know, homework?)
Another part that makes me uneasy is the inevitable comeuppance, which
always seems so gleeful. That's the point where I went from rooting for
Kat and Mouse to feeling all icky: when they
catch the blackmailer (don't ask) and they use their finding to…blackmail
right back. Meet the new boss, same as the old boss. Though of course,
of course, Kat and Mouse are totally different! They're nice! They're cool! They're…part of a trend that makes me uncomfortable.
I'm not against a predictable story, at least not usually, but there's
something about the way this old familiar tune is played that seems
cynical to me.

6 thoughts on “Kat and Mouse and Disappointment”