I've been meaning
to get to fairy tales, about which people have such very strong
feelings. To get to fairy tales, and also to gifts. In this gift-ish season, I
find it's a tricky thing to try to buy kids books, partly because you
don't always know which ones they already have and have read, and you
don't know which ones they're really going to like.

My girls went through a heavy princess phase back when they were around
5, and I really struggled with ways to tame my own aversion ("You
really want to live in a monarchy? I'll show you a monarchy…") as
well as ways to get into it with them that worked for all of us:
princess, glam, and still interesting. By far the most successful (as
far as I was concerned, anyway)? This: 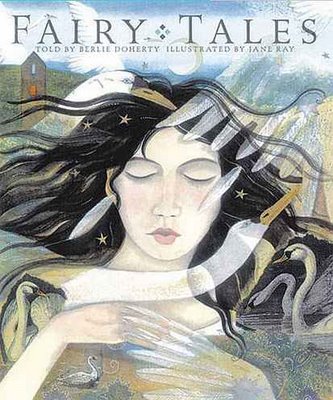 A quick warning. This book is excellent, and has truly
glorious illustrations, but they don't stint on the blood and the
violence. Cinderella's stepsisters cut off parts of their feet to try
to jam them into the slippers. I liked this aspect of it; I think it's
true to the real strange and magical feelings of what fairy-tales are
supposed to be, but I know some people are less enthusiastic, so
consider yourself forewarned. Also, for those of you who are troubled by the basic ideas of beauty winning all, and maidens being a sort of troubling center to a tale, if not the hero, these are in no way feminist rewritings.
But what do I love about them? First, I like my fairy-tales
old-fashioned, and well-written, and this really kept with the dark and
thrilling feelings I remember from reading them when I was younger.
Second, and it's hard for me to convey how forcibly this struck me when I first read them: not everyone is white. The prince, the princesses, everyone
here looks a lot more like the people I see on the subway (except much
better looking) than the tiny-waisted button-nosed army that Disney
presents us with. And what a relief that was! I hadn't quite realized
how much I'd missed that until we had it. These people look like the
world around us, and more like my own children, who while white, aren't
Disney-esque—and thank God for it.

Other fairy tales? I do still love the color-coded fairy books, with
the Red and the Blue fairy books being top contenders. And to my great
though sometimes wistful relief, we are far out of the princess phase
and heavily into the girl warrior one.

But knowing all the little girls
out there who are looking for something delightful to be read to them,
are there any you guys would recommend as well?