I've gone on (and on) about various
reading to various children: bedtime stories for eight-year-olds,
bedtime stories for 10-year-olds, reading to nephews, etc. And to my
mind it's all pretty good. True, one does get a bit done with certain
books for the under-4 set, and the freakishly addictive nature of the
Berenstain Bears books is a troubling reality, but all
in all, I've had a good time reading to, and with, my kids. I'm not the
best at it, I don't do all sorts of cool voices (and by the way all
those people who long ago suggested the Mud Flats books, that is just about one of the most awesome read-alouds ever, so thank you).
I had one of most excellent of all my reading together experiences just
recently. Diana appeared downstairs, right near bedtime, and settled in
next to me on the couch, all washed and nightgowned, with brushed teeth
and everything, just saying, "Hey, will you look at this with me?" 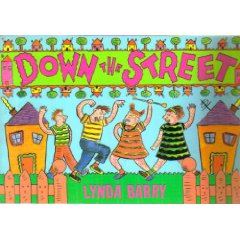 Now,
I've mentioned Lynda Barry before here, and I've been thinking a bit
about why its pull is so very strong. I've been a Lynda
Barry fan since I read the excellent Big Ideas
and Girls and Boys. I was never quite as compelled by her later stuff, her
explorations of her childhood. They rang true, but it was hard to know
how to read them, somehow. Was she being ironic? Sincere? Confused? What was going on, exactly?
Well, Diana's immersion in it has given me a whole different
perspective. For Diana there is no grownup medium through which this
stuff is coming, it's somehow pure, it reaches her with an astonishing immediacy
and intimacy. She just accepts it as the voice
of a child.
The pages she wanted to go over with me are the ones where each kid has designed his or her perfect room: 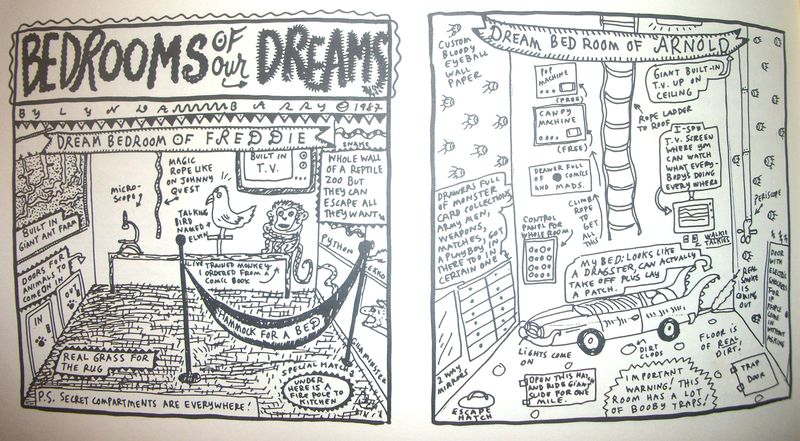 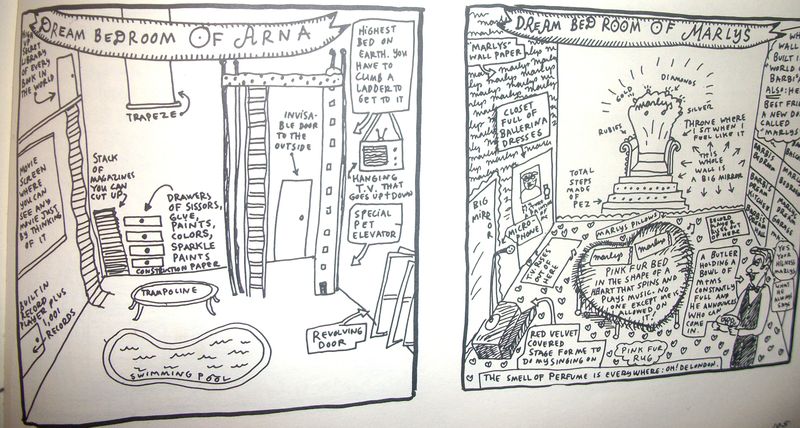 "Which
one do you think is best for me? Which one do you think I would live
in?" So we got to really study each room, and we got to talk about
which pages she just sort of liked and which ones were more like great art (Diana's term, not mine). We got to talk about
Marlys, and Freddie, and Arnold, and Maybonne, and what they were like. And I wish I could convey
it better, but it was…oh, I think I can't convey it because I don't know what it is I felt, only that it was awesome, and heart-expanding in the best possible way.
Note, one of these books (Come Over, Come Over or Down the Street, I'm not sure) has
something about incest, and they're all a bit harsh in places, as
reality often is, so be aware, I guess. But still. It was really just the most excellent thing, one of the best reading-to experiences I've ever had. An absolutely great thing to do with your nearest 10-year-old.

One thought on “A Very Particular Pleasure”