Spring is coming. Wait, no really, it is. I believe this.
We've
never been ones for spring cleaning, or, to be honest, any cleaning,
but we're in the process of altering our house so Diana and Chestnut
will have different rooms, which involves lots of people moving all
over the place, and in doing so we are going through a whole bunch of
our stuff and winnowing it down. Or trying to.
It's so hard to know when it's the right thing to move a book along to
its next owner. Many of Diana's books seem like they might be just
right for Chestnut. Or will they? Tastes are emerging for sure. Diana's
love for fantasy is strengthening and evolving all the time, while
Chestnut seems to be heading more toward a 'real girl' kind of fiction,
and it's hard to know what will change in the future. Here are the
books Diana was ready to let go of: 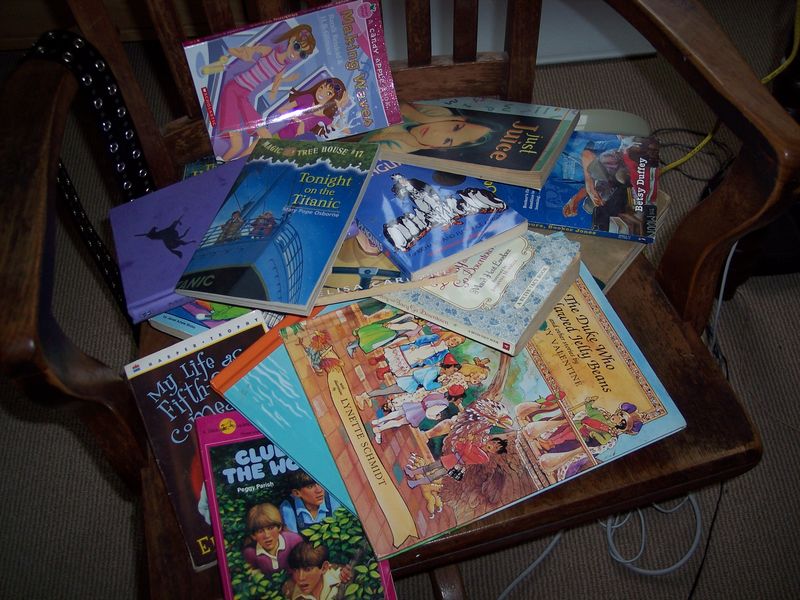 Here are some of the remaining books in Diana's collection: 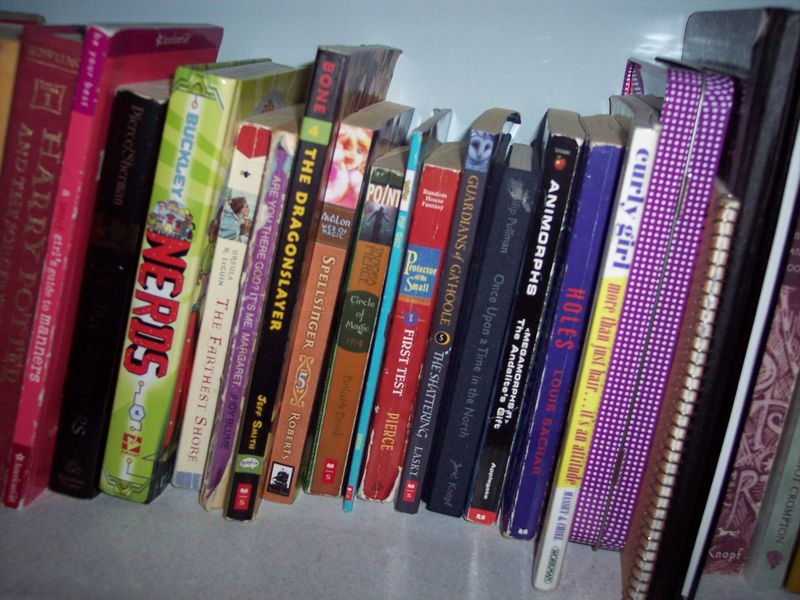 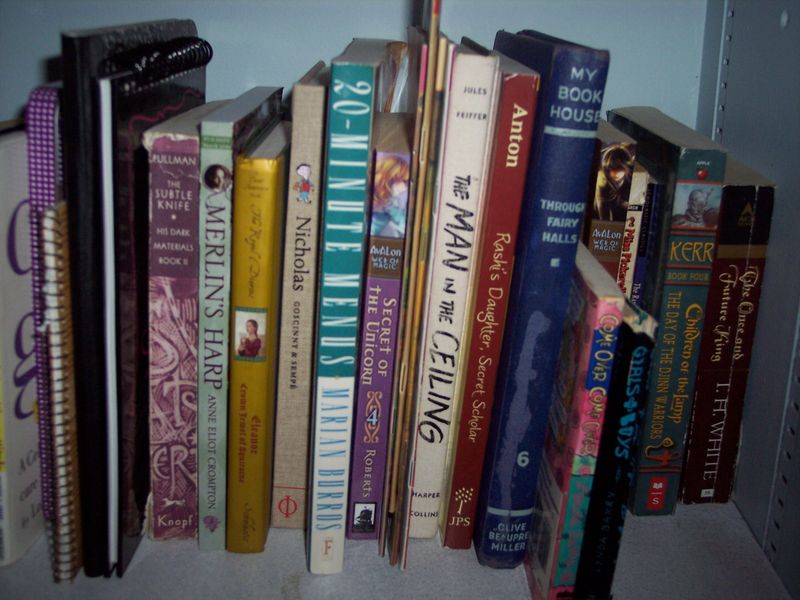 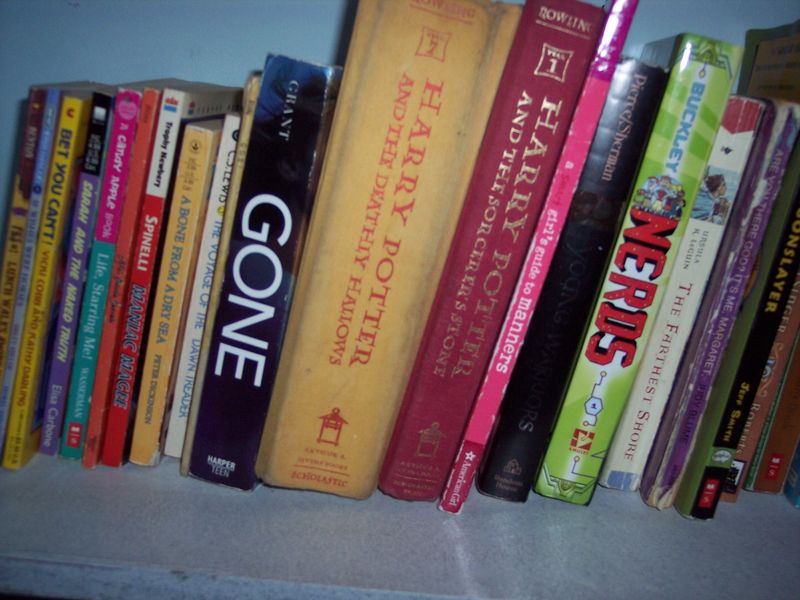 Then there are the ones that she is passing down to her sister: 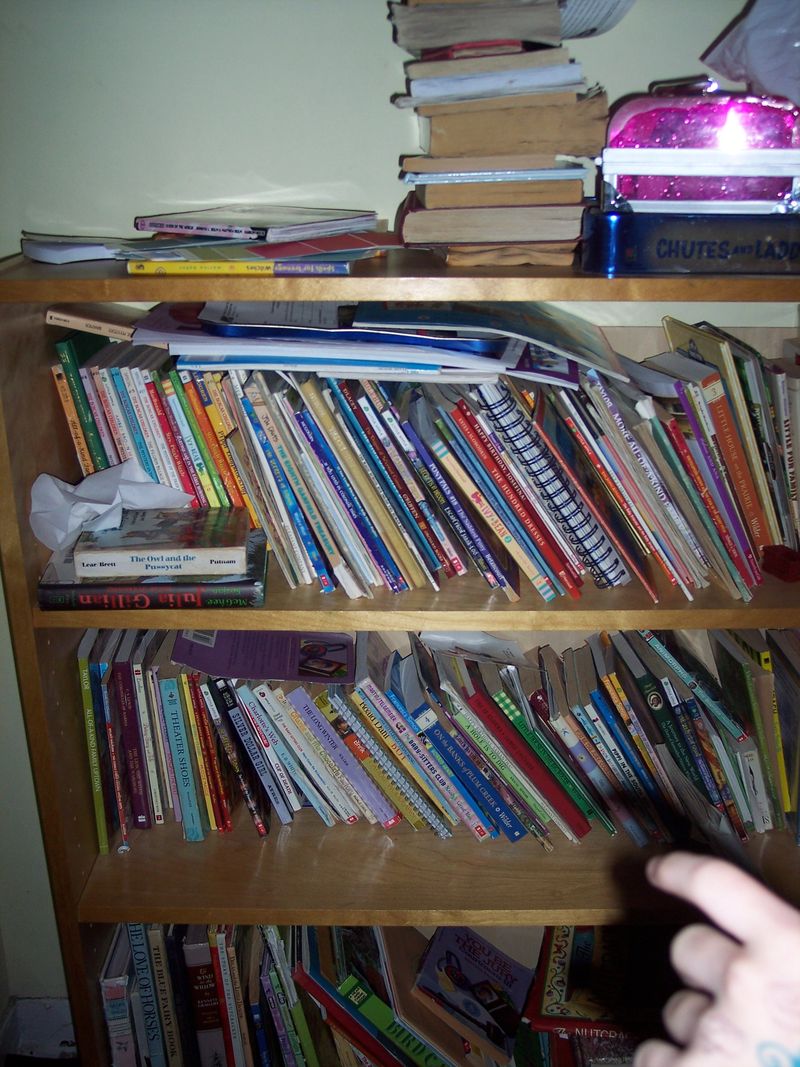 Pretty classy having the hand in there like that, isn't it?

Anyway, we're sorting and assessing. The most painful of all are those books that no one wants: Hop on Pop, One Fish, Two Fish, In the Night Kitchen.

Everyone
I know has these books already in their libraries, and our copies are
too tattered and loved to give to anyone we don't know well. The girls
are done done DONE with them; they don't want them in their rooms. But
how can we toss them?
I am trying to live by the whole idea that less clutter is somehow
good because I feel like that's what everyone seems to say to me and believe in with a really almost convincing fervor, but I don't know that deep down I believe it. I think of the
people I know and love, and the more cluttered ones are no worse off
than those leading streamlined lives. And yes, I've read Clear Your
Clutter With Feng Shui (to the so-far-eternal mockery of my husband), and while to him I will sort of defend it, inside I can't shake the feeling that it's all
bullshit.

I know that tossing things is supposed to engender an exhilarating feeling of freedom. But  with the books, I tend to get a bit melancholy. I mourn the lost possibility of being holed up somewhere in a house
and finding a book that has no right to be there and then it's all
yours. Not a carefully selected and curated book, but a random and
silly (and definitely not impressive) book. It's those weird leftover,
cluttered serendipitous (there, I've used my friend Hanna's most pet
peevish word) things that don't seem so possible in a cleared and
uncluttered space. Or then again, maybe it's just that I'm lazy and I don't want to clear them out. We did end up getting rid of eight crates of books, which is really something, sort of. But already I miss them.

A note to all Brooklyn locals: we are giving away all our books to the
most excellent book sale at Park Slope's United Methodist Church, which
is this coming weekend. It appears to be a really worthy church, out there doing good works all the time. They're taking donations Thursday and Friday,
then selling a whole bunch of other books back to you Saturday and
Sunday.

13 thoughts on “Are Books Clutter?”