I am a female person raised upper-middle-class
(or so) on the east coast of the United States. And it follows from this, somehow, that  I was brought to seek (and heed, if possible) advice of all kinds. Especially girl
advice—how to make him like you, how to be popular, how to have more
fun, how to how to how to.

Let me tell you, I ate it all up. I still do. I know there are a
million strands of politics and power bound up in the whole business,
but there is something so satisfying to me in the notion that someone
else will be able to solve your problems. That solutions exist, you just can't see them. But look, here comes someone who knows better,
who's going to make everything come out all right. And if I now tend
more toward the Ethicist (a strange and guilty pleasure, probably
having more to do with finding out other people's problems than with
learning anything edifying) then so be it—it's still true.

Watching my children, though, wade into the advice swamp is a whole other thing.

Diana
and I were at the library the other day, the main branch, with its
thousands and thousands of books. I'd already been disappointed in my
search for Graham Greene and had wandered back to the YA stacks, where
she was sitting with a pile of manga (a new interest), and I found
myself wrestling with my demons, trying to fight down my fear but
failing, inexorably drawn to the section on…advice for middle school.

Here's what I found. This: 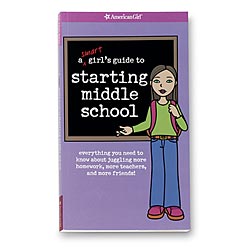 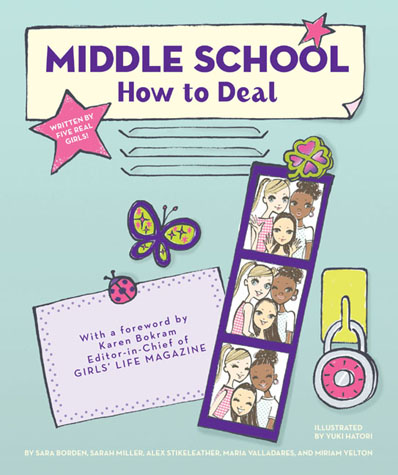 Yes, if I were a better blogger I would figure out how to make them both appear to be the same size. Ah well.

I have my familiar love/hate relationship with American Girl. There's
something creepily impressive about such an efficient marketing
machine, and they do seem to be doing their best to keep up the old
"But it's how you feel and the kind of person you are that matters."
Which I appreciate, I do.

But there's this implicit vision of this sort of perfect girl,
the one who always believes in herself and stands up for herself and
others, the one with good manners and a positive attitude, who when she
has her heart broken thinks about finding new friends instead of
curling up in a ball and wanting to die. And I just…don't relate. I
mean, I relate to wanting to be the right kind of person, the person
that all that advice is supposed to create. But as a possible self? Even
a goal? Even anything? Nope.

The other one was…interesting. The copy I read at least purported to
be written by five girls who were then in 7th grade, so they know the
whole thing about middle school and were willing to tell it like it is.
And it did, in fact, have many relevant sections, for instance,
how to take your bra off when you're still wearing your shirt, and a
piece on what it feels like when after the first week of school your
friend from your old school who always ate lunch with you says "I think
we should maybe start trying to make other friends" and goes off the
next day to eat with the popular kids while you stay eating in the old
spot. In short, things that made a bit more sense to me. But nothing that really, I don't know, seemed as if it would help in times of trouble.

Diana and I talked about it a little bit on the way home, with me
offering "Um, I don't even know if you're interested, but you are
starting middle school soon and maybe you want to read about it…" And we ended up talking about a whole bunch of other things, about popularity and power and control. And it was a really excellent conversation, one I really enjoyed. She didn't come down anywhere about the books, so I let it drop. And I wish I knew better than to try and hope that somehow there really as one out there that was going to make things better for her, or easier. I was hoping, I think, that after all this time there would be an advice book that actually helped a person. Do they even exist?

6 thoughts on “A Word of Advice”