Yet another in our We Recommend series, where you guys write in asking for what would be the right book for the small reader in your life. Go ahead, try us!

So here's a We Recommend that is odd in a number of ways: 1) the person didn't write in, just happens to be a coworker looking for a recommendation; 2) used a book I've never actually read as a point of reference (though this isn't odd, indeed it's the second time it's happened in the very near past; and 3) the coworker is male, and maybe I'm wrong but I think it just may be the only male voice ever to be heard on this blog (not counting authors).

But I feel that I must post about it, because he said, "Oh, you haven't read The Princess Diaries? Oh forget it then, you won't be any use." To which I responded: hmph.

So here is his conundrum: His daughter is a very very smart, 13-year-old girl, who reads a lot. However. She's not into…harshness. Her favorite books? The Princess Diaries. Sweet. Girly. Nothing too terrible happens. Real-ish. I mean, not super real, but not fantasy or magic either. But essentially: nobody dies. Or at least, not until they're really old.

I find it endearing that a child can make it to 13 and still feel this way. Life is very harsh, and there's something to be said for trying to create a space for yourself where that harshness doesn't intrude. So many kids have watched 100,000 people die in movies by the time they're 8, it's nice to think that some of them actively avoid having to see that.

But this doesn't address the real question, which is, what should this kid read? What will be gentle and at the same time grown-up enough that if it's left around the apartment, she will pick it up and be engaged? (And yes, left around the apartment. She is 13, after all. A book her father directly recommends to her will never be read. I gather that's what happened to A Tree Grows in Brooklyn, my first suggestion.)

What's so tough about it is that all the great books that make perfect sense—Little Women, Anne of Green Gables, Ballet Shoes—have been so thoroughly co-opted by little girls that they may no longer be viable options for the big.

So here's what I came up with. Bear in mind, this comes with HUGE caveats. For instance, the description doesn't seem to match what I remember from 1978. Also, it says Cassie is a "swinger," which seems…off. As far as I remember, it was a very tame book about a girl struggling to be who she was, even though she was super pretty and a model and had a perfect audio memory. But as far as I remember, that book was called Me, Cassie, so here you go: 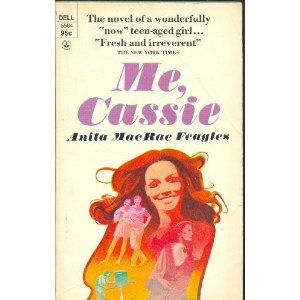 But truly, I know you guys can do better. So give: what's a sensitive teenage girl to do?