Is it just being "good" (loaded word, there) that makes a book compelling to readers? I think it's something beyond that. Something that taps into our imagination and excitement about the world (if you want to think of it positively) or our enormous appetite for thinking about ourselves (if you want to be a bummer about it).

But it's a thrill to discover one of these books, and watch it transform each kid who touches it, like the goose's golden egg. This is the book I am thinking of: 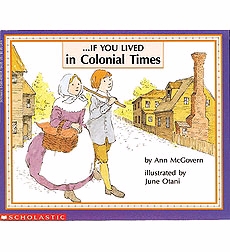 Its power is undeniable: every child I have seen who has come within its orbit has been sucked in. And it doesn't end when you find out what life was like if you lived in colonial times, oh no. Then you have to go back to the beginning to read it all again. Why? I don't know. I think it that in some way it allows kids to conceive of a reality without them in it, by having them think about it with them in it. Do you know what I mean?

So much of growing up is about understanding that the world is bigger than you are, that it existed before you and will in all likelihood continue after you are gone, that as central as your own life is to you, there are billions of other people and each has his or her own life as well. The world exists outside you.

Or maybe I've getting all philosophical for no good reason, when really it's just cool to find out that kids didn't used to have plates! Or be allowed to talk during meals! They had to wear big cloth donuts around their bellies when they were babies! I mean, I admit it, it's all very amazing.

All I know is that ever since we got the first one years ago, which Chestnut read over and over and over—it has stayed beloved. And when she brought it to a friend's house this weekend ("Because I think she'd really like it, it's really interesting you know?") when I came to pick her up, the friend's younger sister brought it downstairs, held reverently in both arms, then gently placed it in the bag. Because whatever the reason, the truth is: it is loved. And cherished. And that is wonderful.